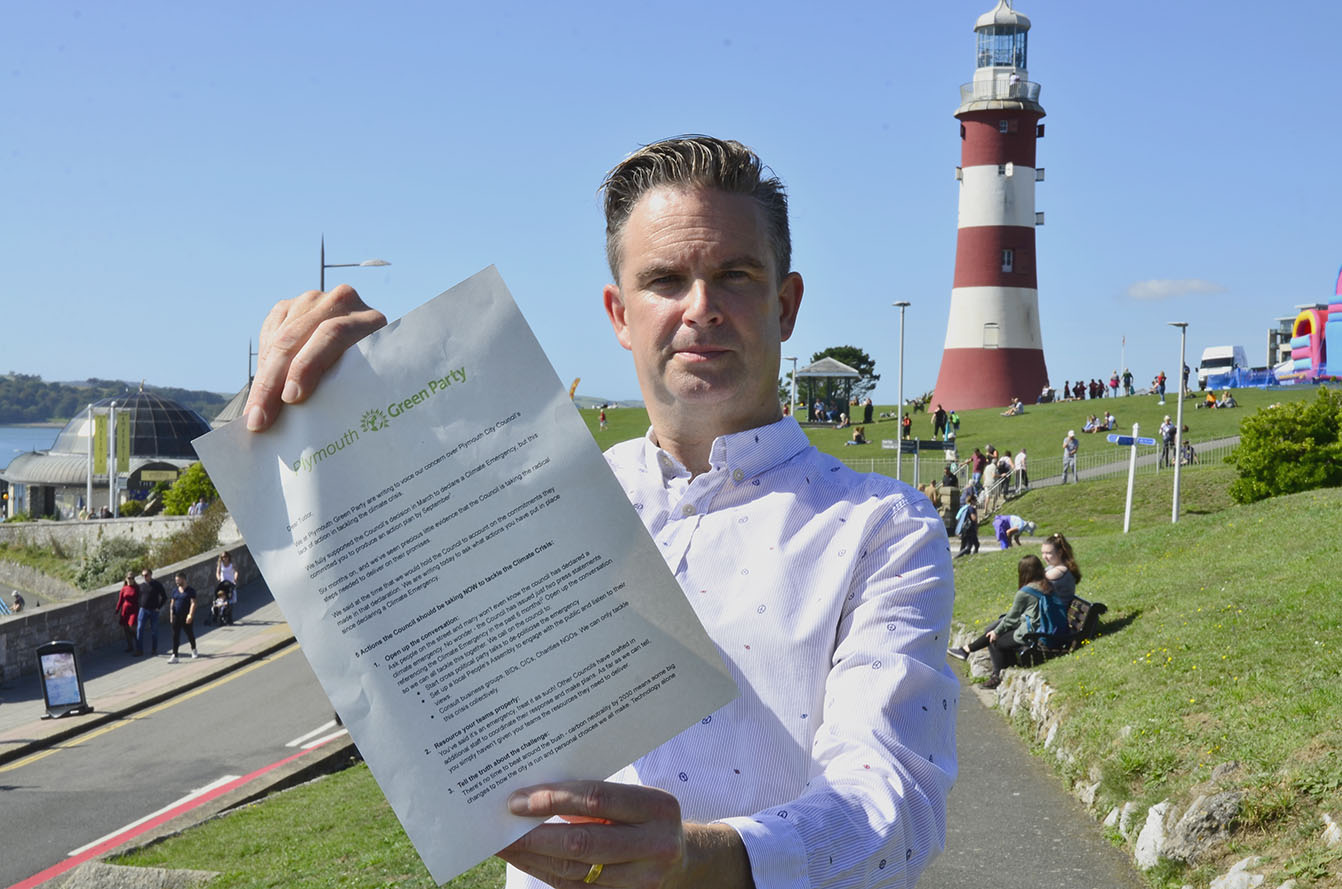 We have today issued an open letter to Tudor Evans asking for an update on the Council’s Climate Emergency action plan.

Ian Poyser, Green Party Coordinator, said; “In March this year the Council unanimously passed a motion to declare a ”Climate Emergency” and committed to delivering an action plan within six months. As the deadline approaches we’re deeply concerned that the Council will miss this target.”

“That’s why we’re sending this open letter with our own suggestions for action the Council could take to move this critical issue forward.”

“The Council has just opened a ‘Climate Emergency Survey’ - six months too late in our opinion, but we’d urge concerned residents to fill this in and to contact their local councillors requesting details of what is being done to develop the plan.”

The letter is published below:

We at Plymouth Green Party are writing to voice our concern over Plymouth City Council’s lack of action in tackling the climate crisis.

We fully supported the Council’s decision in March to declare a Climate Emergency, but this committed you to produce an action plan by September.

Six months on, and we’ve seen precious little evidence that the Council is taking the radical steps needed to deliver on their promises.

We said at the time that we would hold the Council to account on the commitments they made in that declaration. We are writing today to ask what actions you have put in place since declaring a Climate Emergency.

The Council has today opened a “Climate Emergency Consultation” survey - here are five key actions you could take to move things forward.

5 Actions the Council should be taking NOW to tackle the Climate Crisis:

2. Resource your teams properly:
You’ve said it’s an emergency, treat it as such! Other Councils have drafted in
additional staff to coordinate their response and make plans. As far as we can tell, you simply haven’t given your teams the resources they need to deliver.

3. Tell the truth about the challenge:
There’s no time to beat around the bush - carbon neutrality by 2030 means some big changes to how the city is run and personal choices we all make. Technology alone isn’t going to be enough. It’s not popular, but we must be honest and bold; meeting this target means changing our habits.

4. Set out the timeframe:
The clock is ticking. We need a clear time frame, from developing a strategy to
implementing it across the city. Delays are not an option. With every passing day our local contribution to global climate change and habitat destruction could be
irreversible. Therefore, we need to be thinking about what changes can be made to bring forward Carbon Neutrality to 2025?

5. Make the Financial Implications Public:
We need to understand the financial cost and benefits associated with delivering the necessary changes to our society. Hitting these means adapting existing plans for housing, energy, transport and waste. What are possible funding options, what are the implications if funding cannot be obtained? What are the alternatives?

The Plymouth Green Party call upon the Council to deliver an initial high-level costed strategy for public consultation. The document should include the necessary legislative changes required by central government, the impact of change on all residents of the city and the risks associated with not delivering the strategy in the long term. The Council should seek to work closely with other Local Authorities, sharing knowledge and experience
to hasten the strategy development.

We believe that Plymouth can be a leading light and shine the way ahead of other Councils in the UK, perhaps even an inspiration around the world ahead of the Mayflower 400. Now is the time for our city to truly transition to low carbon economy, bringing with it green investment, jobs, improved health and prosperity.

We look forward to your response.